One of the Largest Mountain Lion Exhibits in New England

At the heart of Wild Cat Station, presented by The Hanover Insurance Group Foundation, is a dramatic and intimate experience of a set of mountain lions in their natural New England habitat. Utilizing and transforming the former polar bear habitat, the sibling cats are home in their re-created mountainous terrain while visible from multiple viewing angles by our visitors.

The brother and sister kittens were found emaciated and orphaned in Half Moon Bay, California and brought to Oakland Zoo for vet care. The EcoTarium worked with the zoo through Massachusetts Division of Fisheries and Wildlife for safe transport of the cats.

An exciting part of the new exhibit is how the mountain lion kittens were named: the male name was auctioned off at EcoTarium’s signature fundraiser A Night at the Museum held on April 27, 2019. “Salton” was chosen; it is a combination of the two last names of the winning bidders.  Female mountain lion-naming rights were first extended to EcoTarium members, the public was given the opportunity to vote on their narrowed-down list. “Freyja” is the female name after a close race.

The habitat is one of the largest mountain lion exhibits in the U.S. at 18,500 square feet and meets all accreditation standards and USDA requirements to house large carnivores. It is comprised of grass, trees, logs and rocky alcoves and outcroppings that allow the cats to utilize their natural abilities of climbing, scratching and jumping in the exhibit. The habitat was designed with all four seasons in mind and includes a conditioned space to house the cats inside at night and during inclement weather events. EcoTarium keepers have multiple access points and a training staging area. In the near future, museum guests will have the ability to observe training sessions with the mountain lions. Wild Cat Station completes the final project in Phase II of the museum’s Third Century Plan.

Named the Arthur M. and Martha R. Pappas Educational Plaza for their foundation’s generous contribution, the expanded outdoor space serves as an essential platform for educational programming for schools, educators and for curious visitors.

Mountain Lions: Did You Know…

How did our cats get here?

• Mountain lions are not currently bred under human care in respected zoological institutions- instead kittens come under human care as orphaned individuals. Most kittens have been orphaned because of factors such as car strikes, forest fires and other natural disasters, as well as hunting.
• Federal and state agencies often are the initial locaters of abandoned kittens. Fish and Wildlife agencies will do their best to observe kittens and track a mother.
cougar before removing them from their natural habitat.
• Orphaned kittens would be unable to survive in their first year of life without the initial care and necessary learning skills that a mother provides.

Are there mountain lions in Massachusetts?

• The mountain lion is the only large cat on the planet not dwindling in numbers.
• Once thought to be completely solitary, recent research shows evidence of social family groups, females raising young together and females accepting males to share a kill with her kittens.
• They are opportunistic, stalk-ambush predators that surprise their prey from behind and crush the throat in a swift kill.
• Mountain lions are crepuscular – they hunt and are generally most active around dusk and dawn; their pupils are rounder than a domestic cat’s, whose pupils close into those distinctive slits during the daytime.
• Known for stealth and athleticism.
• Bound up to 40 feet running
• Can leap 15 feet vertically
• Travel 10 mph for several miles, reach speeds up to 50 mph 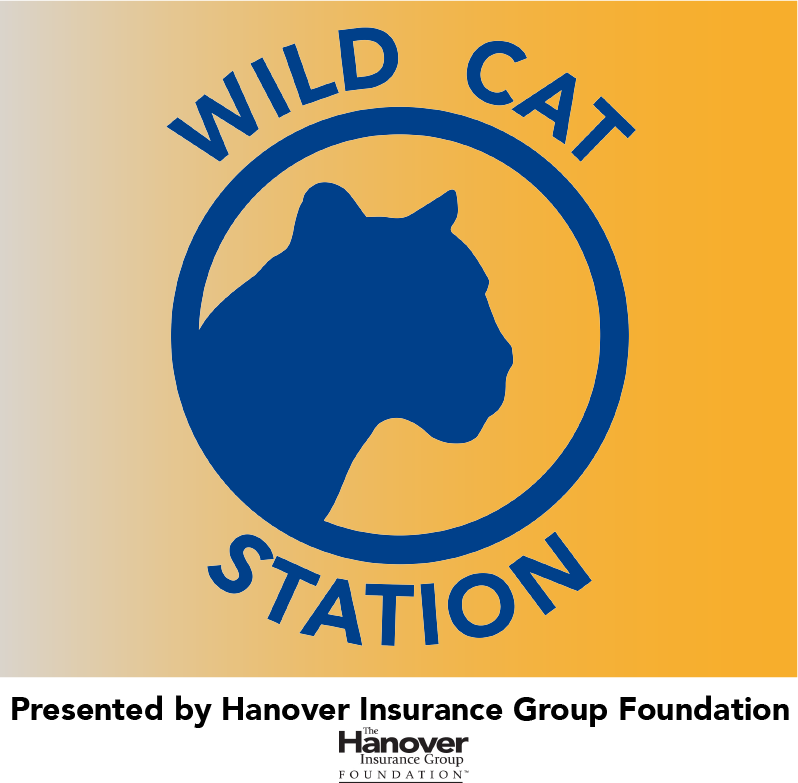 While all enclosures have been specially designed to meet the natural needs of the species as well as to accommodate any physical limitations of the individual animal, animals need novel experiences to use their natural instincts on a regular basis. This is called “enrichment” and it is a regular part of good husbandry (care of animals by humans).

You can support a variety of our enrichment programs by purchasing items from our Amazon Wish List which will directly get your items to our resident wildlife. Click on the button below to see how you can help:

The habitat houses Ralph, a turkey vulture, Jello, the red-tailed hawk, and soon a new corvid species.  All species are native and serve major roles in the ecosystem as predators and scavengers and contribute to rodent control. The site offers a variety of educational information, including the use of rodenticide and the implications it has on various species in the natural environment.